What's the Difference between Hard Drive (HDD) and newer SSD?


What’s the difference between SSD and Mechanical HDD?

What’s the difference between SSD and Mechanical HDD? The simple answer is that SSD has no moving parts and functions similarly to USB memory sticks, while the Mechanical HDD has a magnetic tape and a lot of moving parts. SSD is also considerably smaller and takes up less space in a PC case, in some instances even mounted directly to the motherboard. SSD is also way faster – 10 times faster than an HDD. 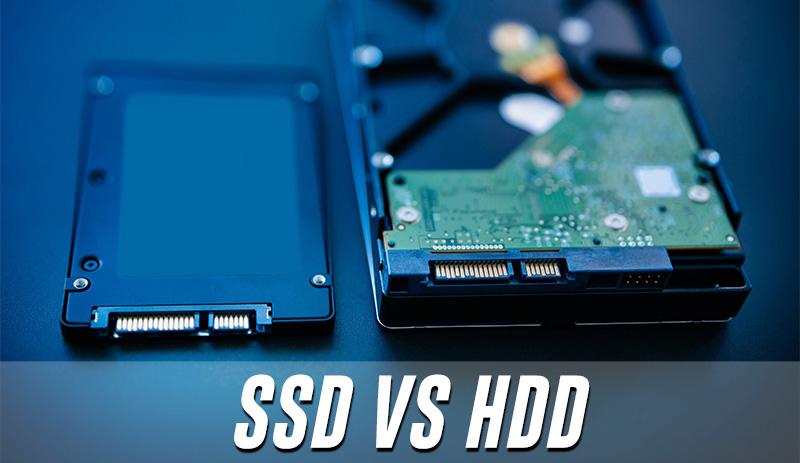 What is SSD Storage?

SSD stands for Solid State Drive, and it’s like an oversized, more sophisticated version of a USB memory stick. Like a USB memory drive, there are no moving parts, and the data is stored in microchips. Storing data on a chip is what makes the SSD so much faster. A typical SSD uses what is called NAND-based flash memory, which is a non-volatile type of memory. A non-volatile memory is that it will not forget where the data is store when the disk is off. An SSD does not have any mechanical components to read and write data, instead it relies on an embedded processor called a controller to perform operations related to reading and writing data. The controller is a very important factor in determining the SSD read and write speed. As the controller will make decision to where it will store, retrieve, cache and clean up data that can determine the overall SSD performance.

What is HDD Storage?

Hard Disk Drives or HDD, was first introduced by IBM in 1956 and uses magnetism to store data on a rotating platter. A read/write head floats above the spinning platter reading and writing the data. The faster the platter spins, the faster an HDD can perform, a typical laptop drives today spin at either 5400 RPM ( revolutions per minute) or 7200 RPM, though some server based models are up to 15,000 RPM.

When it comes to appearance, the most common size for laptop hard drive is 2.5” form factor while a larger 3.5” form factor is used in desktop computers. The larger size allows for more platters inside and thus creating a larger storage capacity.

This chart breaks down the major factors of storage between HDD and SSD.

Now if we tally up the total, the winning category is SSD with 9. This means that SSD will be the replacement technology for all HDD in the near future. As new technology is being released, lower capacity SSD will be cheaper than a standard HDD and will be at the same price point. By that time, there will be no benefit to choose an SSD over an HDD.

V7 will be launching a complete line of SSD products in the next few months so stay tuned for more. For more information contact v7bids@ingrammicro.com.